Simple Blood Test Can Save a Man’s Life

If you are having a medical emergency, call 9-1-1. Refresh your screen to get the latest wait time. For the most accurate wait time, call the hospital.

It’s out of sight and usually out of mind, but the prostate – the walnut-sized gland that fits between the bladder and the penis in front of the rectum – cannot be ignored.

It plays a significant role in the male body, producing and releasing fluid that nourishes and protects sperm during ejaculation, as well as creating fluid that lubricates the spinal cord. In addition, urine passes through the urethra, which goes through the prostate. If there is an issue with the prostate, such as prostate cancer, it can affect a man’s health, self-image and lifestyle.

Prostate cancer is one of the most common forms of cancer among men. Fortunately, it can be detected early with simple testing, including the prostate-specific antigen (PSA) test. This simple blood test is commonly used to measure the blood level of a protein (called PSA) that is created in the prostate. It is performed annually in the office by a primary care doctor or urologist. 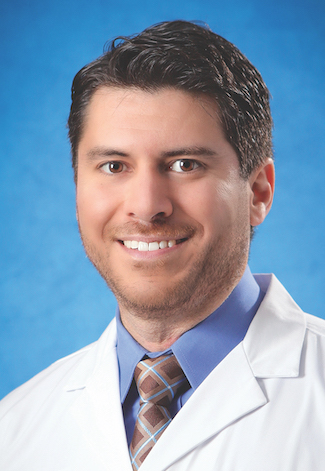 According to Ramon De La Torre, MD, a board-certified physician in family medicine with Laredo Physicians Group, “The PSA test is the best way to detect prostate cancer early, when it is most treatable and less at risk for spreading to other parts of the body.”

Although screening guidelines differ, Dr. De La Torre says that the strongest recommendation is to start screening at age 55. The test is not necessary after age 70. As with other screenings, if an individual is at increased risk for prostate cancer due to family history, race (African Americans are at higher risk, for example), smoking history or age, screenings may be recommended between ages 40 and 54.

The normal PSA level is 4. In general, the higher the PSA, the more likely there is an issue with the prostate. However, Dr. De La Torre says, “There are lots of reasons a PSA level can be higher than normal, including certain infections, conditions (such as an enlarged prostate) and medications. Even a digital rectal exam can elevate PSA levels.” Also, some prostates produce more PSA than others.

If a patient’s PSA is higher than normal, he is referred to a urologist for a biopsy.

Prostate cancer usually grows slowly but can be aggressive. Symptoms of prostate cancer may include difficulty urinating, pain during urination, weak flow, blood in urine or semen, and sometimes pain in the back. Some of these symptoms can be vague and occur with minor conditions such as a urinary tract infection, an enlarged prostate or prostatitis, which is why early screening is key.

Dr. De La Torre says that many patients avoid the test due to fear of cancer. He tells his patients, “I understand that you’re afraid and concerned, but those feelings, or the choice to not get screened, aren’t going to protect you from getting cancer.”

Speak to your doctor if you are experiencing any of the above symptoms or to establish your candidacy for a PSA test, along with benefits and risks.

To find a doctor, visit laredophysiciansgroup.com or call Doctors Hospital of Laredo at 956-523-2000.

Get monthly updates with health news, recipes, and more